Over years as a Certified Charleston City Tour Guide, I have had the pleasure and privilege to share my hometown with thousands of visitors. It has been rewarding to introduce people from all over the world to our beautiful and historic city. One of the things that my visitors particularly enjoy learning about our “Kitchen Houses.”

Dating back to the 1700’s, Charleston’s larger more luxurious homes would typically have outbuildings constructed separately behind the main house known collectively as dependencies. These structures were utility buildings that each served a different purpose. They could include a Carriage House for horses and carriages. There may have been a workshop for repair and maintenance projects. They would have most definitely included a privy for sanitation. The centerpiece of the dependencies would have been the Kitchen House. This would have been a two-story structure with the kitchen and a laundry on the first floor. Here the cooking fires would have been burning all the time. On the second floor would have been the living facilities for the Enslaved Americans who cooked for their owners as well as performed various other domestic duties. This was a brutal existence particularly in the summer months as the temperatures in the kitchen house could easily exceed 100 degrees. Meals were prepared in the kitchen house and then brought to the main house for service to the owner and his family as there was no kitchen in the main house.

The kitchen house was built to reduce the possibility of a fire in the main house. This makes sense given that even today almost 50% of house fires start as a cooking fire in the kitchen. A fire could quickly spread to engulf an entire section of the city given the close proximity of Charleston’s structures to each other. 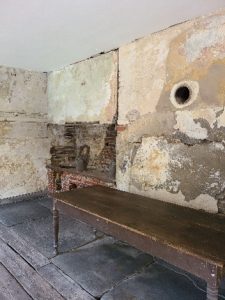 After the Civil War Kitchen Houses were abandoned, and dependencies were occupied by freed slaves as well as the poor of all races. By the late 1800’s, cooking had transitioned from the traditional use of cooking fires to cooking indoors with stoves. In 1882, City Fire Protection was consolidated and modernized. This contributed to kitchens being installed in the larger homes. In many cases the former kitchen houses were joined to the main house as they were typically the closest dependency to the main house. This join is quaintly called a “hyphen”.

In 1931 the City of Charleston passed the first city ordinance in the country protecting Old and Historic structures. As this preservation effort matured, many exteriors of these dependencies were restored, and the interiors were modernized. Owners would use them as rental property or have the lot resurveyed to include the dependency as a separately titled parcel that could be sold as a residence. A stroll through Charleston’s Old and Historic District will reveal “half address” house numbers that show where this has been done. 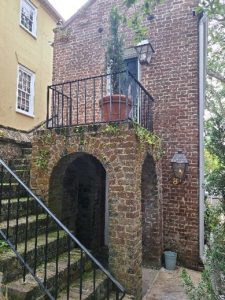 To view 18th and 19th century kitchen houses in their original state, take time to visit the Heyward Washington House at 87 Church Street or tour the Aiken-Rhett House at 48 Elizabeth Street.